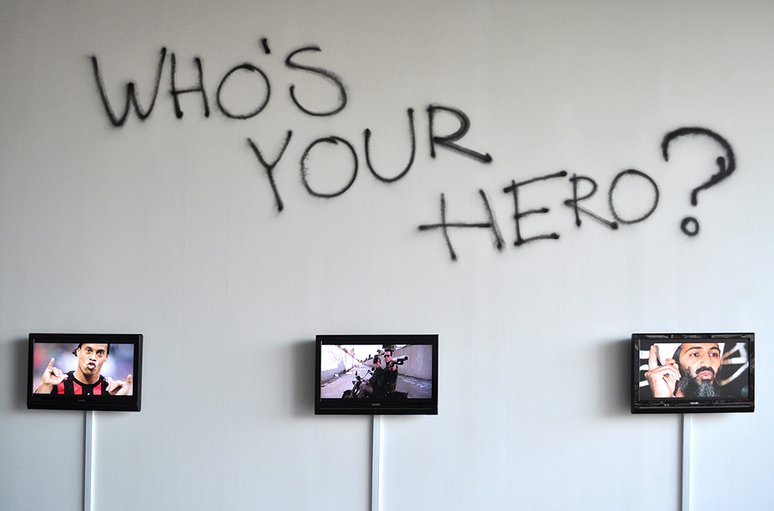 Who's your hero? at The Return of the losers, Kalmar Konstmuseum, 2011

The three-channel video installation Who's your hero? consists of three cinematic ideal portraits that reflect fictions and projections, with which a young person begins his life. The subjects of the portraits represent simplified tropes of life, death, and courage and are transferred and transformed between the widely different personas. The work balances the alteration of value between the construction of hero fiction and ideological reality.

The work takes as its starting point the American anthropologist Scott Atran's visit to the city of Tétouan in Morocco, a place that most of the attackers of the Madrid bombing in 2004 grew up. Atran asked the young people he met in Tétouan what their role models and heroes were, based on the ambition to try to understand how they looked at the world and why so many suicide bombers originated from this particular place. The youngsters listed their three main heroes and the overall result was: 1. Ronaldinho (the Brazilian footballer), 2. Terminator (film character played by Arnold Schwarzenegger), 3. Osama bin Laden.

Who's your hero? is the starting point for a series of works by DiPisaStasinski, which centers around themes of human irrationality, evolution, religion, and politics and which seeks a redefinition of how and why hero images are created and distributed.

This webpage is under reconstruction and will soon be updated with a link to the videos.